PROTOTYPE #1 is complete and almost ready to market this week.

The Pure Maple Syrup is the easy part. Packaging is the tricky part. I bought the bass-bottles and sterilizer. Have access to a licensed commercial kitchen to fill the bottles.

I need to buy shipping boxes. And when (if) i run out of my own maple syrup, the ONLY Michigan organic maple farm i trust is Maple Creek Farm to fill my bottles. The bottles will be clearly marked if the syrup is from my trees or the farm's trees (the farm is awesome!)

(i have a half ton of these bass-bottles in my living room, sorry Deb).

Last night in DETROIT, Ron Stabinsky (google him) reached inside of his grand piano to mute the strings with one hand and snap out percussions to match drummer Kevin Shea's groovus maximus.

That's how my gig report should begin.
But I just woke up, over slept! I never sleep past 6am let alone 7:30am. I didn't drink last night, didn't jump up on stage like i do, didn't scream my head off. I have an "absorbing-awesomeness hangover" right now and have to grab a cup 'o java and walk around the block to get my mind right.

The band called "Mostly Other People Do The Killing" dropped my jaw.

I got there early to sit and chat with bassist Moppa Elliott.
Of course we talked about me because i dont really know anything else. I explained to Moppa how i've harvested maple sap to make syrup and he told me this joke thats based on his real life.

When the harvester finds a dead squirrel in the sap bucket in Minnesota, Wisconsin, Michigan, Vermont, Upstate New York, and Maine, they all remove the dead squirrel leaving the sap in place and allow the bucket to re-fill completely...

Moppa raved about his band mates Ron Stabinsky and Kevin Shea... then talked about Léon Theremin, Ronnie Montrose, John Coltrane, Meat Puppets, Duke Ellington, and just had fun trying to explain improvisational moves and touring unusual venues. Then, he went on stage and smacked the hell outta his upright bass with all his might and played it with both the hair side of his bow and then the wood side of his bow.

The songs were all names of towns in Pennsylvania which made me realize that he didn't tell me a dead squirrel joke. But rather warned me of the crazy jazz performance about to take place.

I've been awake since 3:30am now because i'm excited about boiling the sap down... I strained the sap thru cheese cloth, and now the sap is on the fire in the kitchen of love. I will bring 4 Gallons of Maple Sap to a frollicking boil, then move the hot pot onto the burner outside for about 6 hours.

I'll continue to add more pre-heated sap to the pot outside all morning until I've reduced 12 gallons into one gallon. Then i'll bring it back into the house to monitor the boiling with a candy-thermometer. It should make about 16 ounces of quality pure maple syrup. From the tree, to my stove, into bottles.

I'm toying with the idea of trying to sell my home made syrups. I can sell them at farmers markets but i don't know what the reality of it is to sell online. 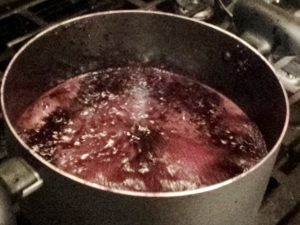 One thought on “Blog”